The project, an initiative of complex owner Purple Vetch Properties, LLC, was the first significant infrastructure upgrade since at least the early 1990s, when the building transitioned into residential use following service as the community junior high school and, before that, Shelbyville High School.

Over those past three decades, the property exchanged hands several times – one of Rasner’s companies owned it at one point – until Purple Vetch, a Northern California real estate developer, picked up the complex in 2012. Company president Mitch Genser’s original intention was to renovate the deteriorating building with the help of low-income housing and historic tax credits within two or three years.

“But securing such funding took many rounds of initially unsuccessful applications to the state agency overseeing this process, and years marched on,” Genser said.

Two years ago, the long-awaited financing came through. Sterling Bank, based in Missouri, provided the much-needed short-term construction loan to make the project a reality. A tax credit investor from Boston, The Cherrytree Group, through their P & R Fund, purchased the tax credits and now sits in partnership with Purple Vetch Properties, LLC. And the state of Indiana, through their IHCDA Development Fund, rounded out financing with a multi-year low-interest loan to enable the restoration project to go forward. Old Shelby High Apartments, LLC has recently secured approval from Cedar Rapids Bank & Trust out of Iowa for permanent financing that, sometime this summer, will replace the construction loan and provide stable financing for Old Shelby High for the next few decades.

The present-day Old Shelby High Apartments comprises two of the three structures that make up the complex of historically significant buildings listed on the National Register of Historic Places and the Indiana State Historic Preservation Office. These include the original Shelbyville High School building, built in 1911, which faces Second Street; the Junior High School building, built in 1917, which faces Tompkins Street; and the gymnasium, built in 1922, located on Fourth and Meridian streets and houses the City of Shelbyville Parks and Recreation offices. That court, Paul Cross Gymnasium, was the home floor for Shelbyville’s 1947 boys state basketball championship team.

The recent renovations to the old classrooms restored much of the buildings’ former glory.

“Not only are the windows and doors breathtakingly similar in appearance to what was installed back in 1911, when this glorious building was first built, but the building envelope is now so much more secure, which makes for a much better, more comfortable, and energy-efficient experience for the residents at Old Shelby High,” Genser said.

The school-days feel still exists inside, too, thanks to the enormous hallways, original wrought iron stairwells, a large basketball mural – painted by then-student Rachael Passwater (Ackley) – and other jewels found during renovations. A wall painting discovered in an old art classroom was preserved. Natural light was restored to the hallways by removing bricks that had blocked-in deteriorating windows decades ago. Energy-efficient LED bulbs replaced the not-original fluorescent bulbs throughout the structure. 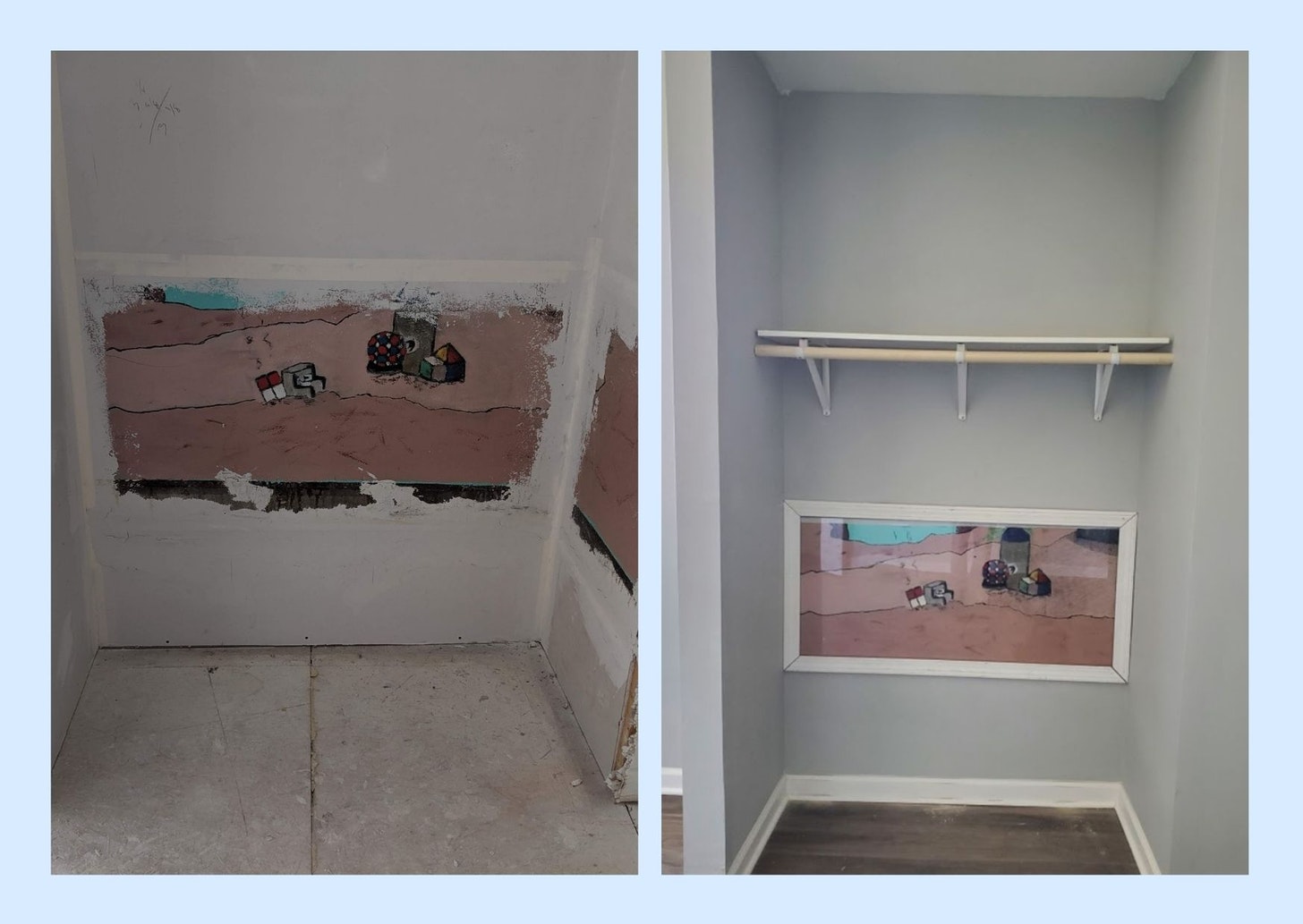 ABOVE: A wall painting discovered in an old art classroom was preserved and incorporated into a unit.

The property now includes 25 one-bedroom, 22 two-bedroom and two three-bedroom units, with significant floor plan varieties available given its previous incarnation as school classrooms, a library and offices. Five units are two-story townhouses, while a handful of others wind down the front of the building. Most units boast 15-foot ceilings.

Three-fourths of the 49 units at Old Shelby High were fully renovated, with new paint and flooring or restoration of the original wood, and upgraded kitchens and bathrooms. All units received high-efficiency condensing boilers, hydronic air handlers and air conditioning condensing units to replace the old hot water heaters, air handlers and condensers.

Behind the scenes, fire security equipment and an extensive CCTV security camera system were added. Genser said the parking lot would be fully resurfaced and regraded down the road.

“It is a different world now at Old Shelby High,” Genser said. “Property Management is now handled by the reputable firm of Moynahan Williams, Inc. (MWI) out of Indianapolis, a company with lots of experience managing low-income housing properties. The company, and their employees who work on site at Old Shelby High, continue to bring a huge commitment to the success of this apartment complex, which is evidenced by simply walking around the inside or outside of the building, and the increased respect the residents now bring to Old Shelby High. From what I can see, it sure looks like Old Shelby High is positioned now to have a few more decades under its belt as a unique place for residents of Shelbyville of modest means to call home while the building gloriously harkens back to another era.”

A “few more decades” is an underestimate to Rasner. “Now it’s good for another hundred years,” he said.