Baker is Bullish About a Cherrytree-backed Redevelopment in Springfield

Baker is Bullish About a Cherrytree-backed Redevelopment in Springfield

One of the fundamental principles behind state and federal historic tax credits is to provide both developers and investors with the financial leverage to re-energize America’s small towns through socially responsible acts of historic preservation.

To hear our governor’s recent remarks about the Cherrytree-backed historic renovation of Springfield’s downtown Massasoit block and the Paramount Theater reassures me that our elected officials understand and appreciate the value of historic preservation with the assistance of tax credits for the right projects.

In investment terms, “bullish” characterizes a sentiment that the value or price of an asset will rise. Anyone who’s seen the Paramount Theater recently knows its civic value had bottomed out. The smell of decay wafts from the building, peels of plaster hang from the ceiling inside, and dank moisture haunts the building.

Soon, this once-treasured building, constructed in 1843, will again be a crown jewel for the city of Springfield.

A recap:
Spurred by available Federal tax credits for developers and investors, the New England Farm Workers Council — a non-profit organization that owns the largely vacant property — was recently able to break ground on a $38 million rehabilitation of the Massasoit Block and the Paramount Theater. The theater, with over 1700 seats, is slated to be completed by December 2021.
The properties on the block undergoing renovation includes the once-famous Massasoit House Hotel. A local business, Main Street Hospitality, will oversee the Massasoit House Hotel portion of the project. The 85-room hotel is scheduled to be completed by December 2020.

Main Street Hospitality has experience rehabbing other historic properties, including the Red Lion Inn in Stockbridge and Hotel on North in Pittsfield.

At the groundbreaking ceremony early in July, the region’s U.S. congressman, Richard Neal, recalled visiting the theater when he was young. One of the events he saw attended was a closed-circuit broadcast of a boxing matching between heavyweight champions Muhammad Ali and Joe Frazier. (A note to our younger readers: in the 1970s this was a very, very big deal.)

“The redevelopment of the northern blocks bedeviled Springfield mayors for as long as I can remember. And the reason was what to do with upper floors,” Neal was quoted as saying by Springfield’s The Republican newspaper.

The benefits:
The structural improvements and refurbishing of the theater and hotel will continue to revitalize the look of downtown Springfield, which most recently saw the opening of a newly renovated Union Station in 2016, a project Congressman Neal also supported.

Overall, the historic renovation project will create roughly 200 jobs, according to the construction unions involved.

Once completed, the project is expected to bring more revenue and business to the city by attracting top-rated music performers to the Paramount Theater and accommodating guests looking to spend a night after the show in the historic Massasoit House Hotel. 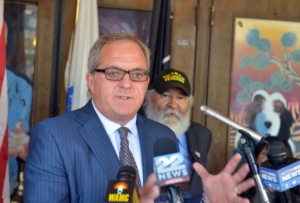 How It became possible:
I’m proud to say my incredible team at CherryTree Group is responsible for funding approximately half of the total cost of the historic renovation project!

By taking advantage of state and federal historic tax credits, as well as the Opportunity Zone Tax Credit, CherryTree Group was able to finance about $20 million.

Additionally, the project received $3.8 million in HUD Section 108 Loan Funds, a $2 million state grant, and private funding.
The project qualified for the Opportunity Zone Tax Credit which Congress approved over a year ago. Located throughout the nation, Opportunity Zones are designed to spur economic development by providing tax benefits to investors. Here’s another example of an Opportunity Zone project in Lowell.

First, investors can defer tax on any prior gains invested in a Qualified Opportunity Fund (QOF) until the earlier of the dates on which the investment in a QOF is sold or exchanged, or December 31, 2026. If the QOF investment is held for longer than 5 years, there is a 10% exclusion of the deferred gain, and if held for more than 7 years, a 15% exclusion of the deferred gain.

An important takeaway:
Many contractors, investors, and owners shy away from historic residential and commercial rehabilitation projects because of the misconception that these projects are more costly.

Want to know how? Ask us.

A little bit of history:
The original Paramount Theater was built in 1929 by Famous Players-Lasky Corporation, which later became Paramount Pictures Inc., for more than $1 million, according to Cinema Treasures. When the Paramount Theater opened its doors on September 29, 1929, it was heralded as the most ornate theater in Western Massachusetts.

The first movie shown was The Dance of Life, starring Nancy Carroll, which was the first of three film adaptations of the Broadway play Burlesque.